A Subdued Start to the Week, US Dollar Drivers will Steer GBP/USD

The seventh round of EU/UK trade talks broke up with little agreed and with both sides sounding pessimistic that a deal can be reached before the UK leaves the EU at the end of the year. The EU said that they were disappointed with the latest round of talks while the UK said that little progress had been made. It is likely that a breakthrough will be made, even if it is just a bare-bones trade deal that can be fleshed out later, as neither will benefit from fresh trade tariffs and WTO trade terms. Talks will continue in the background before the next meeting between the two parties on September 7.

There is little on the UK docket this week to steer Sterling and GBP-USD traders should look to the US for fresh trading signals. There are a few important economic releases this week, including consumer confidence and durable goods – while Fed chair Jerome Powell will speak online at this year’s Jackson Hole Economic Symposium titled ‘Navigating the Decade Ahead: Implications for Monetary Policy’. The virtual meeting on August 27-28, will give traders a clearer picture of how the Fed, and other global central bankers, see the future of the US economy.

GBP/USD is trying to claw back a part of last Friday’s sell-off and trades either side of 1.3100. The recent short-term bullish pennant formation is under threat after a positive breakout early last week and support for the pair is starting to look under threat after a bearish engulfing candle was formed on Friday. Recent lows, all the way down to 1.3000, should stem any sharp sell-off, but the broken pennant and GBP/USD below the 20-dma casts a negative shadow over the pair for now.

Price action has built on bearish momentum which has seen the pair trade lower over the past 2 days while trading back within the zones of support and resistance shown by the blue rectangles. More recently however, after approaching the zone of support around 105.35 – 105.40, the global reserve currency looks to have resisted a move lower on the back of what appears to be short term dollar strength (vs G10 currencies)

In the event of a stronger dollar, USD bulls may consider a break and close above the 105.72 as the initial hurdle before bringing into play the 106.15 – 106.24 zone of resistance.

If the demand for Japanese Yen continues at the expense of the dollar, USD/JPY bears may consider a break and close below the 105.35 – 105.40 zone as the litmus test for continued lower prices. Should this transpire, the next level of support becomes 105.20 followed closely by the 104.96 level.

USD Index Outlook: DXY Recovery May Fizzle Out Ahead of US Jobs Data 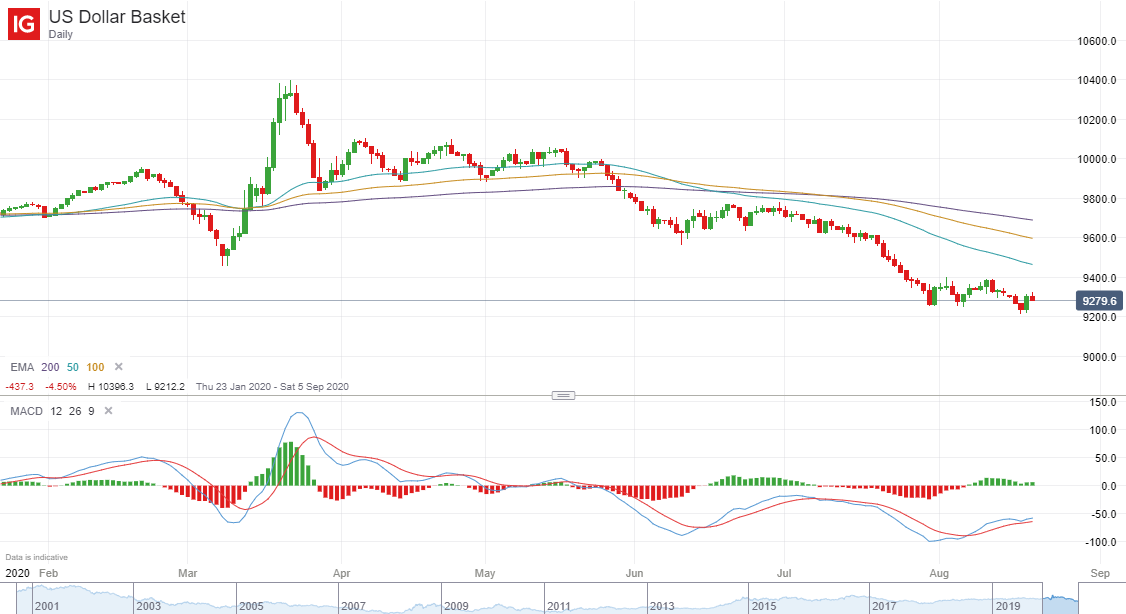 The minutes of the Federal Open Market Committee’s (FOMC) July 28-29 meeting temporarily boosted the under-fire US Dollar, as the central bank subtly backed away from “providing greater clarity regarding the likely path of the target range for the federal funds rate”.

In the previous month’s minutes policymakers specified that the Federal Reserve’s future monetary policy decisions would be clarified “at upcoming meetings”, slightly different to the language used in the recent release in which greater clarity would be appropriate “at some point”.
The central bank also appeared to rule out the implementation of yield curve control (YCC) stating that “of those participants who discussed this option, most judged that yield caps and targets would likely provide only modest benefits in the current environment”.

Unsurprisingly, yields on US 10-year Treasuries jumped almost 3-basis points alongside longer-dating 30-year yields, which nudged up to 1.435% in the wake of the release.

However, the Greenback’s recovery may be limited by the Fed’s commitment to “use it tools and act as appropriate to support the economy”, given the world’s largest economy is still hampered by just under 50,000 new coronavirus infections a day and ideological differences continue to prolong addition fiscal stimulus talks.
From a technical perspective, the US Dollar index appears poised for further losses, as it carves out a Bear Flag continuation pattern after collapsing through the 2011 uptrend at the end of last month.

That being said, price may rally back to test the September 2018 low before its resumes the primary downtrend, if it can breach resistance at the 21-day moving average (93.37).

A daily close above the psychologically pivotal 94 level needed to invalidate the bearish continuation pattern and may carve a path back to the trend-defining 50-DMA (95.34)

However, a break higher seems relatively unlikely given the RSI remains confined by the downtrend extending from the February extremes, hinting at a lack of bullish momentum.

To that end, a daily close below the monthly low would probably intensify selling pressure and could see price collapse towards the 90 level. 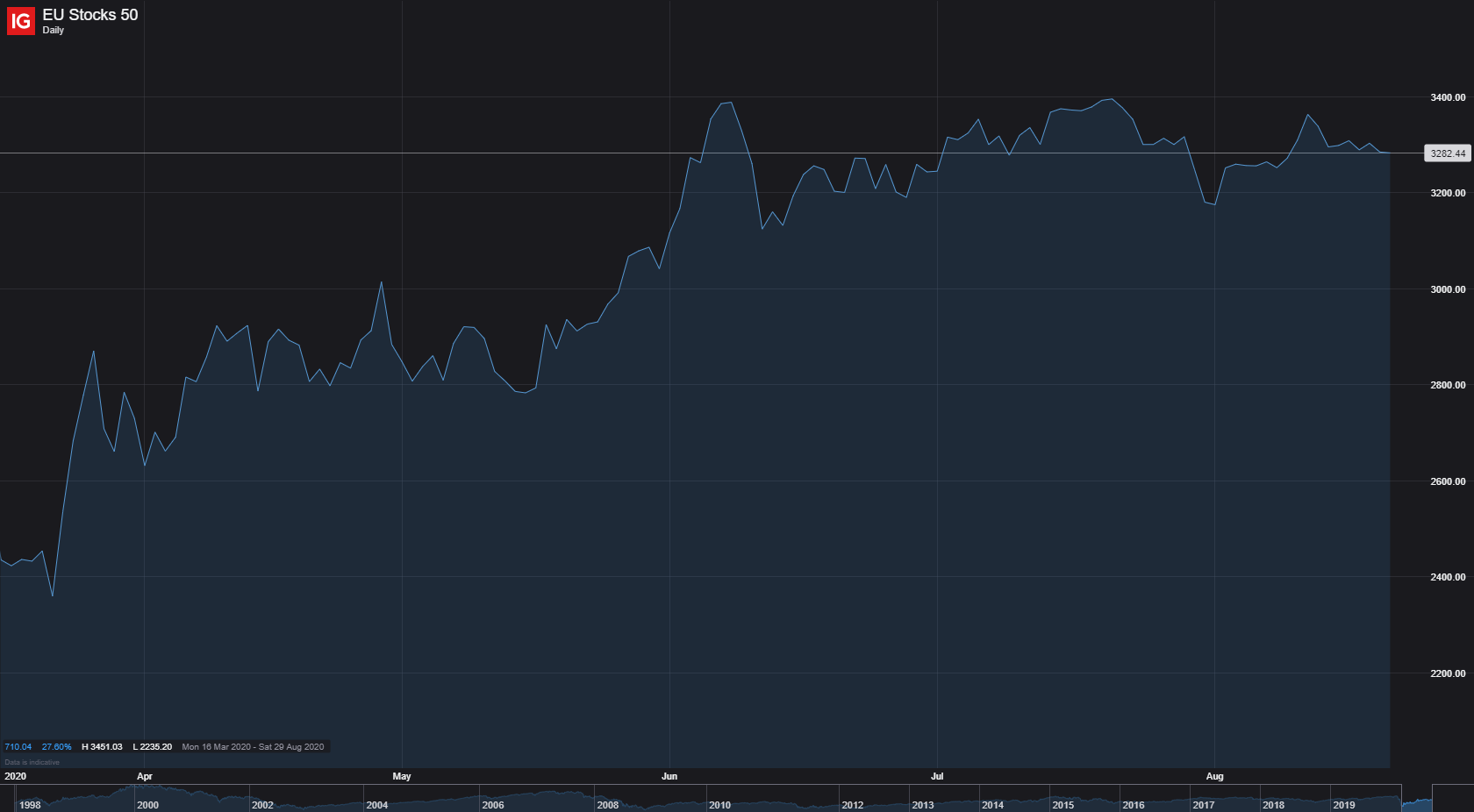 The minutes from the European Central Bank’s July monetary policy session showed that the central bank remained relatively uncertain over the trading bloc’s economic outlook, as committee members agreed that “at its September meeting the Governing Council would be in a better position to reassess the monetary policy stance and its policy tools”.

Opting to wait for “additional information, including more hard data releases, new staff projections and news on fiscal measures” suggests that the ECB is extremely cognizant of rolling back stimulus measures prematurely, despite Chief Economist Philip Lane’s assessment that “incoming data and survey results suggest that economic activity had improved significantly in May and June”.

In fact, Lane emphasized that “although economic activity was gaining momentum, there was no room for complacency” as he warned that “any premature tightening of financial conditions could put the ongoing recovery at risk”.
Therefore, the central bank’s commitment to “do everything necessary within its mandate [and] adjust all of its instruments as appropriate” should underpin regional equity markets moving forward.

However, the suggestion by some committee members that “the flexibility of the pandemic emergency purchase programme suggested that the net purchase envelope should be considered a ceiling rather than a target” could stoke concerns that the ECB won’t fully deploy the €1.35 trillion.

This seems highly unlikely however, considering consumer prices in the Euro-zone fell 0.4% month-over-month in July – the largest drop since January – and a ‘second wave’ of Covid-19 infections in Germany, France, Spain and Italy, threatens to derail the EU's nascent economic recovery. High-frequency data displays a notable drop off in activity during August, reflecting the impact of the recent surge in case numbers.

Nevertheless, the absence of more aggressive forward guidance may weigh on regional asset prices ahead of the ECB’s monetary policy meeting in September, as investors’ mull upcoming economic data to determine the central bank’s next steps.

The theme of US Dollar remains intact, particularly in USD/CAD with the persistent downtrend hitting fresh post COVID lows following a break below support at 1.3170. In turn, given that there is little in the way of notable support, USD/CAD raises the risk of accelerating losses towards the 1.3000 handle. Alongside this, the latest CFTC data highlights that speculators remain short on the Canadian Dollar and thus an unwind of bearish bets provides scope for USD/CAD to fall further. On the topside, resistance is situated at 1.3200, whereby below this level maintains the bearish bias in USD/CAD.