GBP/JPY moving sideways within the context of an uptrend since late June suggests another push higher could come soon. A firm break above the June swing-high will likely have the area around 140.82 in play, a spot that acted as resistance and support from October to February.

A subsequent break beyond the above mentioned levels could open up room to trade to the February 2018 trend-line and a pair of peaks (~144.60), created before the coronavirus rout. All-in-all, this could mean another 500 pips is in store in the not-too-distant future.

To derail the current outlook, a breakdown is needed out of the neatly forming channel since late June (we’ll call it <~137.75). In the event this happens, the 200-day at 137.40 could come into play quickly, along with a parallel from the March low, currently around the 136.75 mark. This would be a big spot of support in the bigger picture. 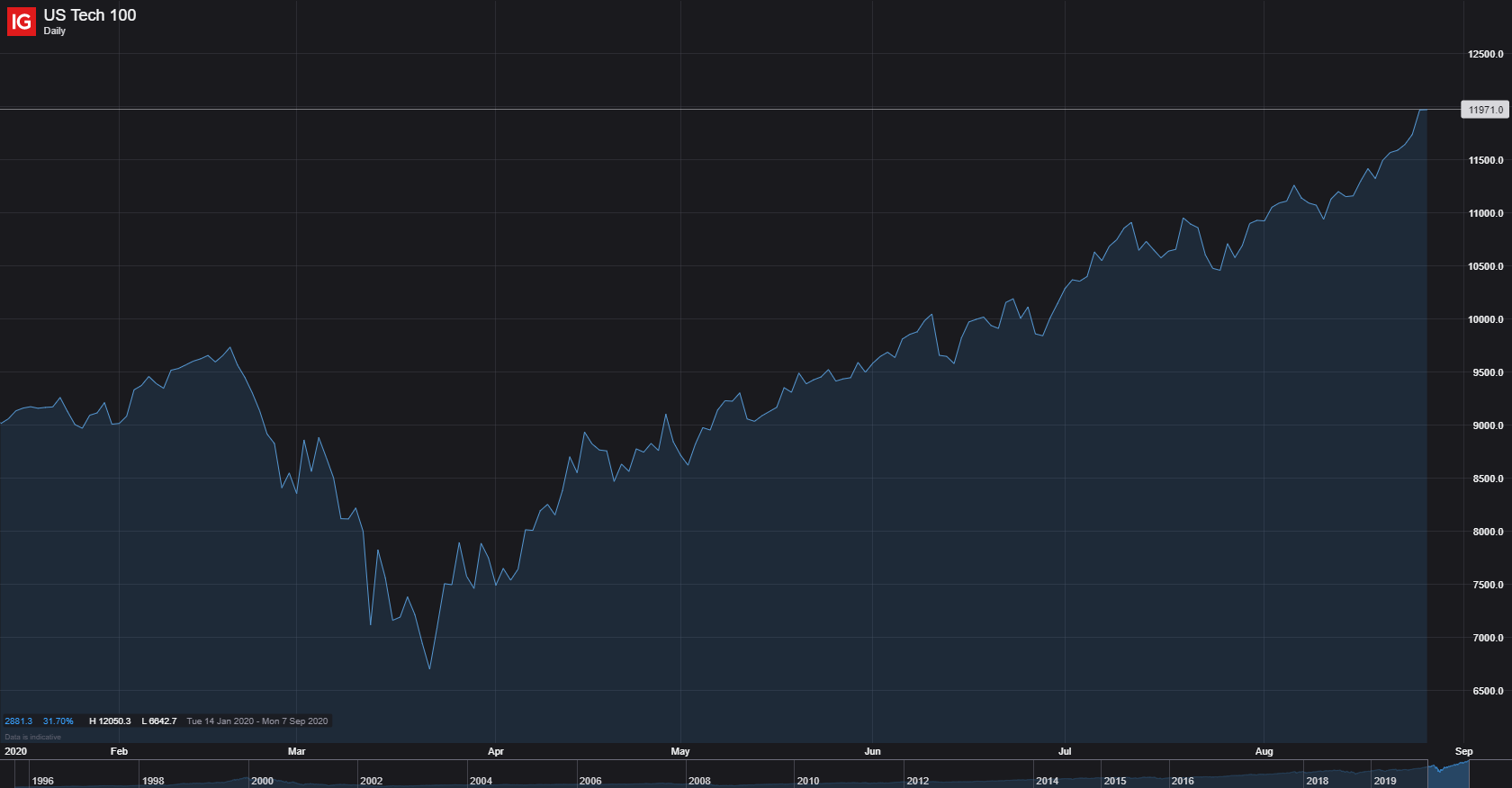 In turn, lower interest rates may also remain while inflation rises. The intended goal is to allow unemployment to taper off while inflation rises instead of immediately moving to raise interest rates in a budding economy just because one measure has become overheated. To be sure, prolonged periods of lower interest rates may continue to provide an encouraging backdrop for the US equity market, but some analysts have begun to question whether this atmosphere will have negative effects down the line.

The Nasdaq 100 has climbed nearly 35% in the year-to-date despite a global pandemic and a looming US Presidential election combining to create immense uncertainty. With the Fed firmly behind them, many stocks have pressed ever higher and some investors have warned this growth is artificially sourced from the central bank. 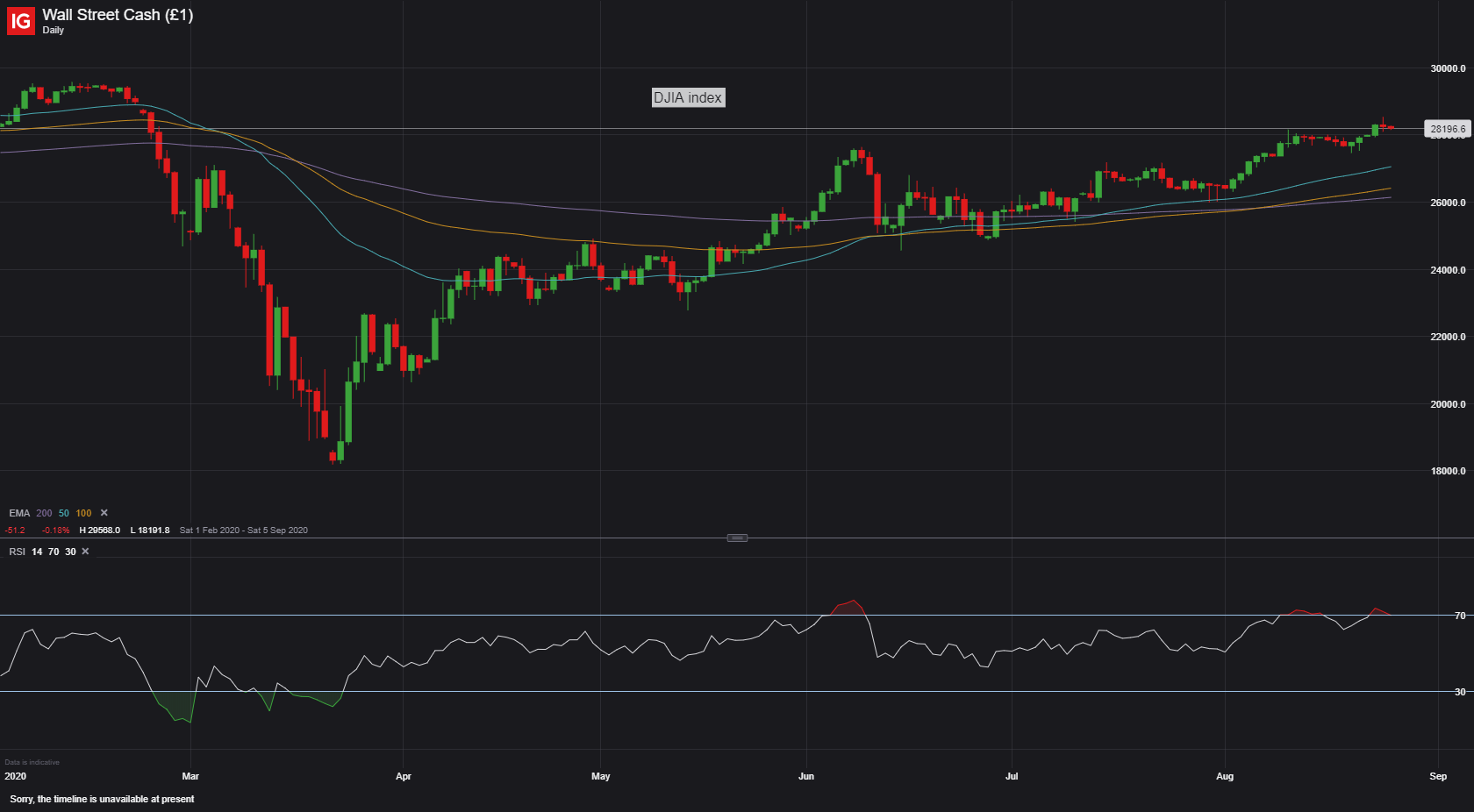 Bearish RSI divergence and a Shooting Star reversal candle above the January low (28130) paint an ominous picture for the Dow Jones Industrial Average and may inspire a near-term correction lower, if price breaks back below psychological support at the 28,000 level.

However, the steeping gradients of the 21-, 50- and 200-day moving averages are indicative of swelling bullish momentum and could result in any potential pullback being met with a wave of bargain-hunters attempting to “buy the dip”.

Nevertheless, price appears poised to slide back towards confluent support at the Pitchfork parallel and June high (27638.6), before potentially resuming its primary uptrend and pushing back towards the record high set in February (29595.3).

Conversely a daily close below the psychologically pivotal 27500 level would likely invalidate bullish potential and carve a path for price to fall back to support at the July high (27187.5).

It’s been a big summer for metals and, well, a number of other physical assets that have gained en masse as the US government launched a trove of measures designed to offset the inevitable business slowdown that followed the coronavirus-drive lockdowns. As most economies continue to hobble with the aim of a ‘V-shaped’ recovery, the one aspect that’s remained clear is that global governments were going to do whatever they could try to offset the economic ills of the pandemic. In many cases, this involved ushering out the printing presses again, and with that prospect of monetary dilution came the potential for gains in hard assets that could simply be diluted: Hard assets such as Gold and Silver.

Are buyers going to be able to get back in the drivers’ seat to produce a move resembling anything like July price action? Taking a step back to look at the daily chart, and a point of potential resistance shows around the 30 big figure, which seems to have had some pull when prices topped-out in early-August. Silver came within 14 cents of hitting that 30-level, and the fact that it didn’t highlights bulls’ lack of conviction at the time, and given the severity of the move a bit of hesitation might make sense.

On a shorter-term basis, a Fibonacci retracement produced by the August pullback can provide some framework moving forward. The 61.8% retracement of the pullback move is currently helping to hold resistance, and a breach above opens the door for a push up to the 76.4% marker, which is confluent with last week’s swing high, taken from around the price of 28.34. Beyond that, the prior highs come into view, with a bit of confluence around the 28.15 area on the chart before the 29.86 prior high and the 30 psychological level. 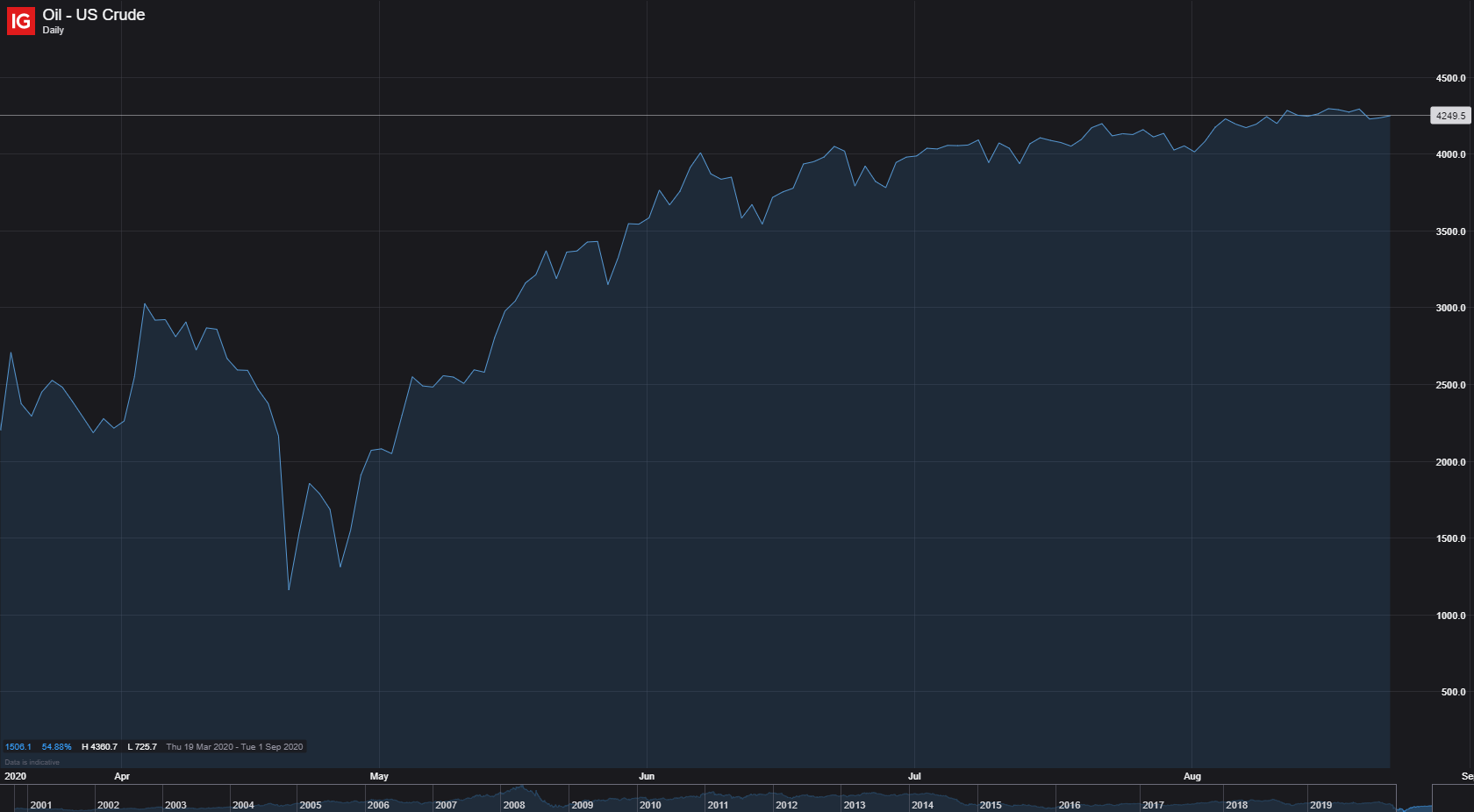 Crude oil prices are trading modestly higher to start the week as the commodity aims to extend its advance. The price of oil has gained ground for the last three consecutive weeks and the move seems to largely mirror the tumble lower by the VIX.

There could be potential for crude oil price action to continue its climb amid falling volatility. This is considering a declining VIX Index generally indicates improving appetite for risk as expected market volatility – and demand for S&P 500 downside protection – diminishes. Likewise, as with stocks, the direction of crude oil is generally tied to risk appetite, economic activity, and prospects for global GDP growth.

However, a sharp reversal higher by the VIX Index would likely be associated with a breakdown in broader sentiment and economic conditions. In turn, this could correspond with bearish headwinds for oil prices. More information on the relationship between crude oil and volatility can be found in our quarterly crude oil forecast above.

Crude oil prices nevertheless remain buoyed by a bullish trend extended through a series of higher lows since mid-June. Technical resistance facing crude oil price action stands out around the $43.00-price level and month-to-date highs. Eclipsing this barrier of resistance, combined with a sustained decline by the VIX Index, might hint at potential for crude oil prices to embark on another leg higher. 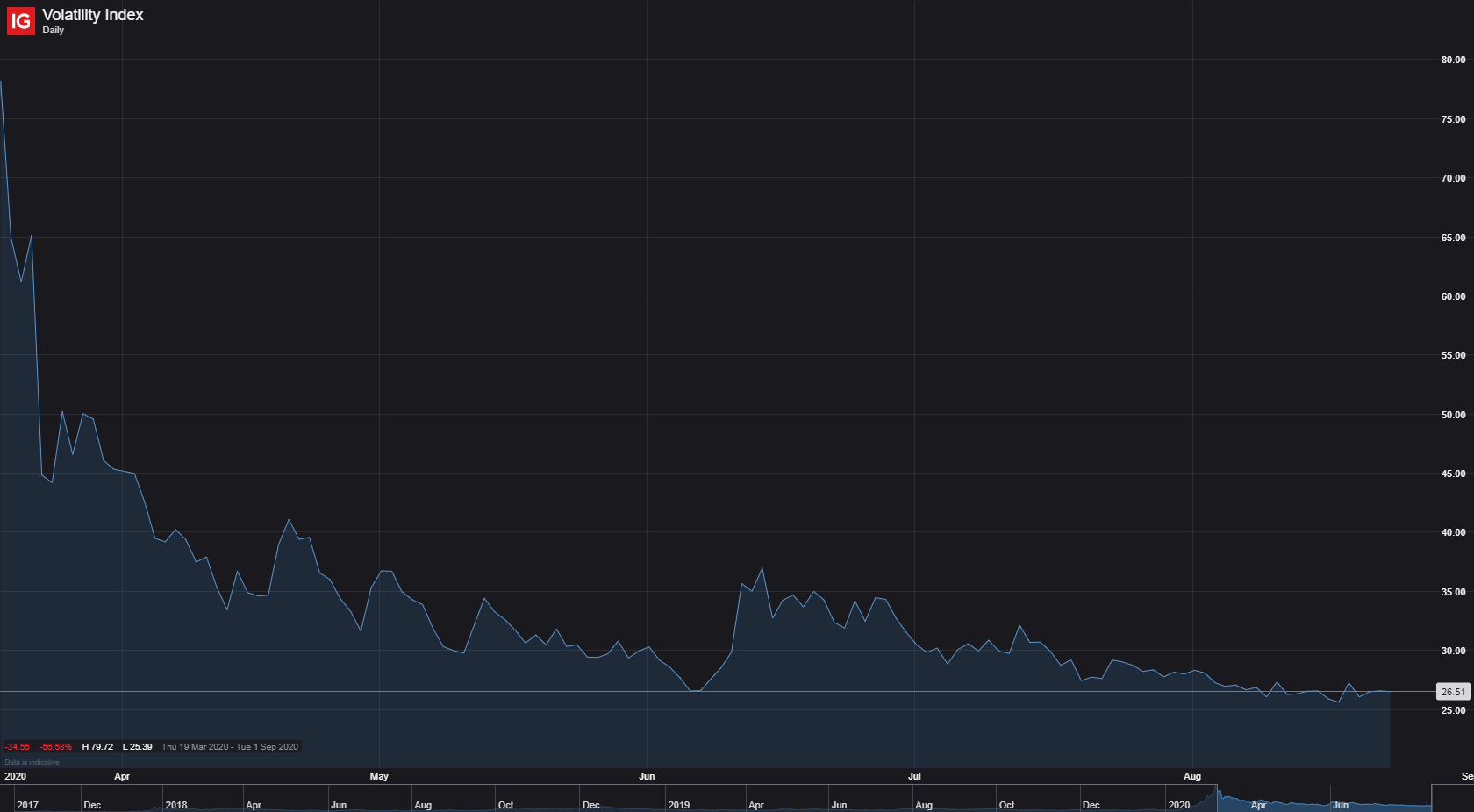