Recent comments from Isabel Schnabel suggest that the European Central Bank is reasonably content with its current policy settings, as the Executive Board member stated that “as long as the baseline scenario remains intact, there is no reason to adjust the monetary policy stance”.

Although the central bank’s policies were calibrated “based on the June projections”, Schnabel appears confident that while “we are seeing a certain resurgence of infections, at the moment it looks unlikely that we are going to see a full lockdown again [which] is precisely what we assumed in our baseline scenario in June”.

This suggests that the ECB may save its monetary stimulus ammunition at its upcoming meeting on September 10, unless a surge of Covid-19 infections forces regional governments to impose economically devastating restrictions.

However, with the spread between Italian government bonds and German bunds notably widening in recent weeks, lack of action from the central bank may significantly sour investor sentiment and fuel a more substantial decline in regional asset prices.

That being said, comments from ECB Chief Economist Philip Lane flagging the Euro’s “repricing in recent weeks” could be a sign that policymakers are becoming increasingly more sensitive to the strength of the local currency and its impact on the trading bloc’s exports. The EUR/USD exchange rate surged to a fresh two year high on September 1 (1.2011).

Nevertheless, while Schnabel believes that “there could be surprises on the upside and the downside, which may mean that we have to reconsider our monetary policy stance”, she confirmed that for the time being adjustment is “not on the cards”.

With that in mind, Europe’s benchmark EU Stoxx 50 index may slide lower if the ECB opts to retain its wait-and-see approach to monetary policy at the upcoming September 10 meeting.

From a technical perspective, Europe’s EU Stoxx 50 index appears poised to slide lower despite carving out a bullish Ascending Triangle continuation pattern just shy of psychological resistance at the 3400 level.

With price tracking below the 21-, 50- and 200-day moving averages and above-average volume seen over the last two down-days, the path of least resistance looks to be lower.

Moreover, the RSI and MACD indicators hint at fading bullish momentum, as both oscillators slide below their respective neutral midpoints and into bearish territory.

To that end, the European benchmark may slide lower in the coming days, if sellers can overcome confluent support at the 61.8% Fibonacci (3243) and Ascending Triangle hypotenuse.

The EUR/USD currency pair has continued trading lower, boosted by the dollar positive jobs data. It now trades toward channel support as well as horizontal support. Yesterday’s extended candle wick indicated a rejection of lower prices however, added momentum off the back of the better than expected NFP may result in a retest of this area of confluence.

In further support of a continued move lower, is the appearance of negative divergence on the RSI, as price made higher highs while the indicator made lower highs. The initial litmus test remains the zone around 1.1790 which then brings into focus the 1.1760 level, however, the psych level of 1.1700 remains key to entertaining the idea of a reversal.

Should Bulls push price higher from here, the 1.1920 level becomes the nearest level of resistance before the 1.1965 level and upper side of the long term come into focus.

Gold prices have largely digested that recent range with price action narrowing through the second-half of August.
Of interest in that theme was a big zone of support running from 1900-1920 that’s held multiple support tests around the lows. This morning saw yet another support test in that zone, and so far buyers have been able to hold the lows, getting an assist from a bullish trendline projection that can be found by connecting August 11th and 26th swing-lows.

This is the first such release since Chair Powell’s comments at Jackson Hole, when the head of the FOMC placed even more emphasis on the employment side of the bank’s dual mandate. Complicating matters around tomorrow’s employment numbers is the potential for noise in the data, as a number of temporary hires to complete this year’s census is likely going to show in the numbers; further obscuring actual impact to the economy based on shifts in the employment market over the past month.

NZD/USD initiates a series of lower highs and lows after taking out the January high (0.6733) as RBNZ Governor Adrian Orr strikes a dovish outlook for monetary policy, with the central bank head providing an overview of the “additional tools that we are considering using as a package in the near future.”

It remains to be seen if the RBNZ will take additional steps to support the New Zealand economy as Governor Orr insists that “it was better to risk doing too much too soon, than too little, too late,” but the MPC may stick to the status quo at the next meeting on September 22 as the central bank head pledges to outline our future monetary policy strategies and tools, and when we might use them.

In turn, the RBNZ may gradually alter the forward guidance over the coming months, and speculation for additional monetary support is likely to produce headwinds for the New Zealand Dollar as the central bank ventures into uncharted territory. 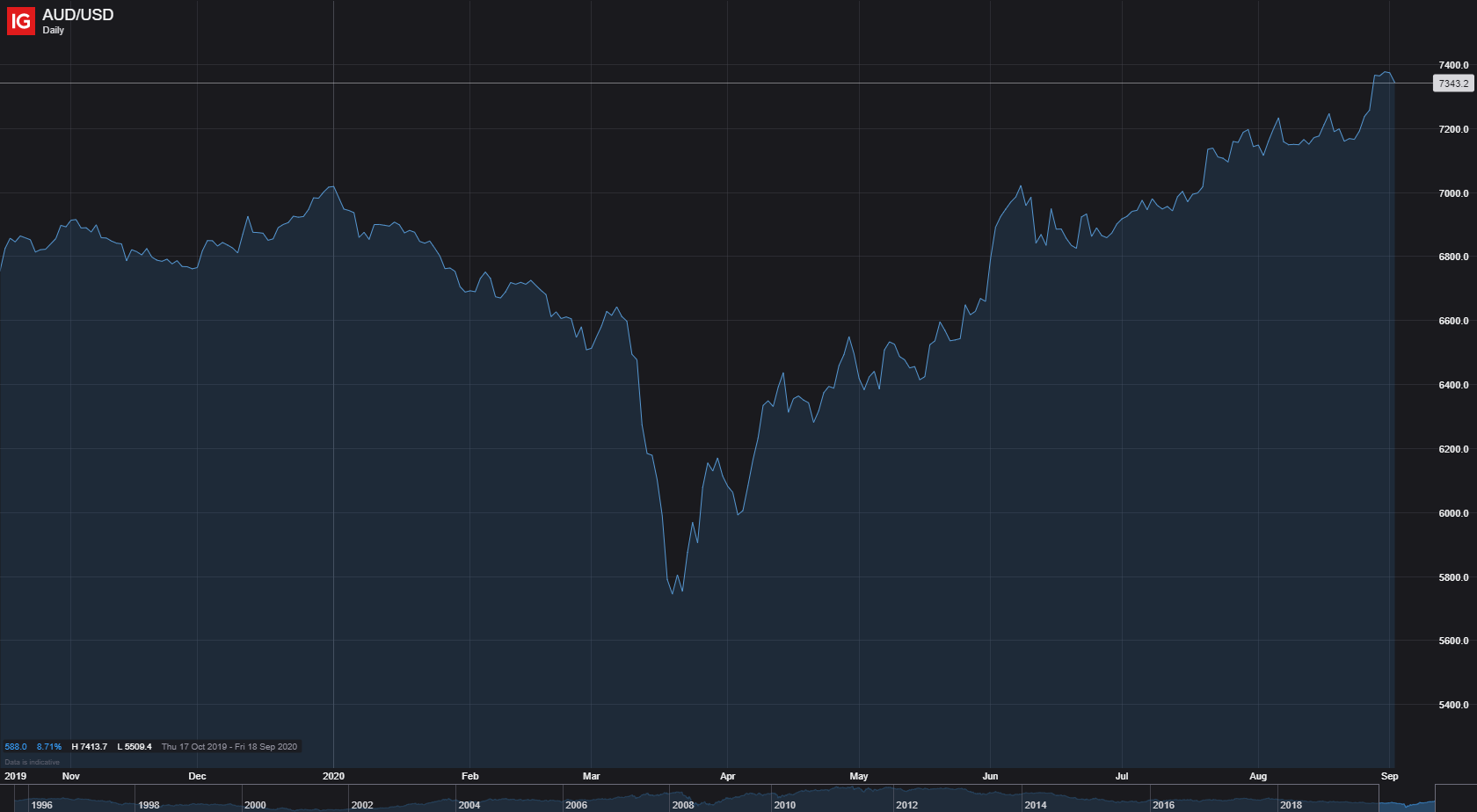 The 7% contraction clearly disappointed market participants and could call the Reserve Bank of Australia into action, given the central bank forecast a quarterly decline of 6.7% in its August Statement on Monetary Policy.

Moreover, Australia’s early emergence from lockdown restrictions didn’t seem to have the expected impact on economic growth, with household spending falling 12.1% and the household savings ratio climbing to 19.8%.

This may be indicative of a permanent shift in consumer activity that could continue to hamper the local economy’s recovery and may result in a notable discounting of the Australian Dollar in the near term.

Attention now turns to upcoming retail sales data for August and escalating trade tensions with China, which may dictate the medium-term outlook for AUD.