AUD/JPY: At an Important Spot On the Chart

AUD/JPY had a nice ascending wedge going for it not too long ago, a pattern highlighted as giving the pair breakout potential. The lean was towards the upside given the pattern, and that we got, but there was also a question of how sustainable that breakout could be given long-term resistance.

So far those concerns are being validated as the wedge broke and price sagged back to the underside trend-line of the wedge. This is an important spot, because if support can hold then so can the upward bias towards another attempt to break the long-term downtrend line.

But if the lower side of the pattern breaks the move down could be even more powerful than a move up. First, you have that long-term resistance within a downward channel that suggests the long-term trend is down. Secondly, failed pattern breakouts can lead to an mass exodus with the crowd leaning the wrong way during the congestion phase that created the pattern in the first place.

Support is support until broken, and we have yet to see that happen. Using the overnight low at 76.11 as the level to watch. Stay above and a push higher could ensure, however, if it breaks then we should see AUD/JPY start to accelerate lower as the long-side of the market finds itself on its backfoot, with 72.52 (bottom of the wedge) as the first big target.

The FTSE looked headed for a breakdown last week, but managed to keep intact the integrity of the downward channel its been stuck inside the past few months. With last week’s hold the lower line of the channel since June just grew in importance.

The downward channel continues to dominate price action, but at some point this structure will get broken, whether that results in a downdraft or rally is to be seen. The longer the FTSE leans lower the higher the likelihood appears that we see a retest of the March low or worse.

If, however, the FTSE can maintain the lower parallel, then it could set up to at least test the upper parallel, or better. At first it will be viewed as a line of resistance would-be sellers may want to use for solid risk/reward short entries. If the top-side line breaks, then the long-side could gain traction towards the falling 200-day at 6461.

For now, there isn’t much to be done other than be patient until either the bottom-side line is broken, top-side line tested/broken. At some point soon with summer ending we should see markets spring to life or fall quickly. A seasonally weak time of the year is being greeted with plenty of risks out there – Brexit, Coronavirus, and U.S. elections/China tensions, so the downside continues to the more likely direction over the coming weeks.

The upcoming Bank of Canada interest rate decision may underpin CAD against its major counterparts in the near-term, as Canadian policymakers are expected to retain their wait-and-see approach to monetary policy in light of recent economic data that shows the local economy is recovering faster than expected.

Markit manufacturing PMI figures for August pointed to the largest expansion in factory activity since August 2018, and second quarter GDP shrank less than the expected 39.6% plunge.

However, with the unemployment rate still hovering above 10% and an annual inflation rate of 0.1%, the BoC is likely to confirm its commitment to “hold the policy interest rate at the effective lower bound until economic slack is absorbed so that the 2% inflation target is sustainably achieved” and could flag future adjustments to its policy framework.
RSI has yet to snap below its uptrend extending from the March extremes and the MACD indicator continues to track firmly above its neutral midpoint, which suggests that selling pressure may begin to fade in the coming days.

A daily close above the 21-DMA (80.60) probably opens a path for CAD/JPY to retest the January low (82.13), with a break above potentially resulting in price fulfilling the implied measured move (84.10) of the Descending Triangle carved out from early-June to mid-August.

Conversely, a break below the 200-DMA could ignite a more substantial correction and possibly lead price back towards support at the 50% Fibonacci (77.87).

DAX 30 Ready to Break Out

The sideways path in the DAX looks close to ending. The convergence in price over the summer months is setting up for a breakout scenario. Last week, the index attempted to fill the corona-gap, but the attempt was very short-lived as the gap-up into the gap was swatted back lower shortly after the open of trade of that day.

This brought an underside trend-line from June into play, a line that has several inflection points that make it a solid line of support. A break below it would likely lead to a sell-off towards the 200-day and July low at 12253.

But in recent sessions when the U.S. markets have worked off some their froth, Europe has held it together. This did not seem a likely scenario before as relative weakness in the DAX and CAC appeared to be sending a signal that they wanted to trade lower once the leading stock market took a break from rallying.

If the DAX can continue to show short-term relative strength in the face of further U.S. weakness, then this could set up for a sustained breakout into the corona-gap towards new record. 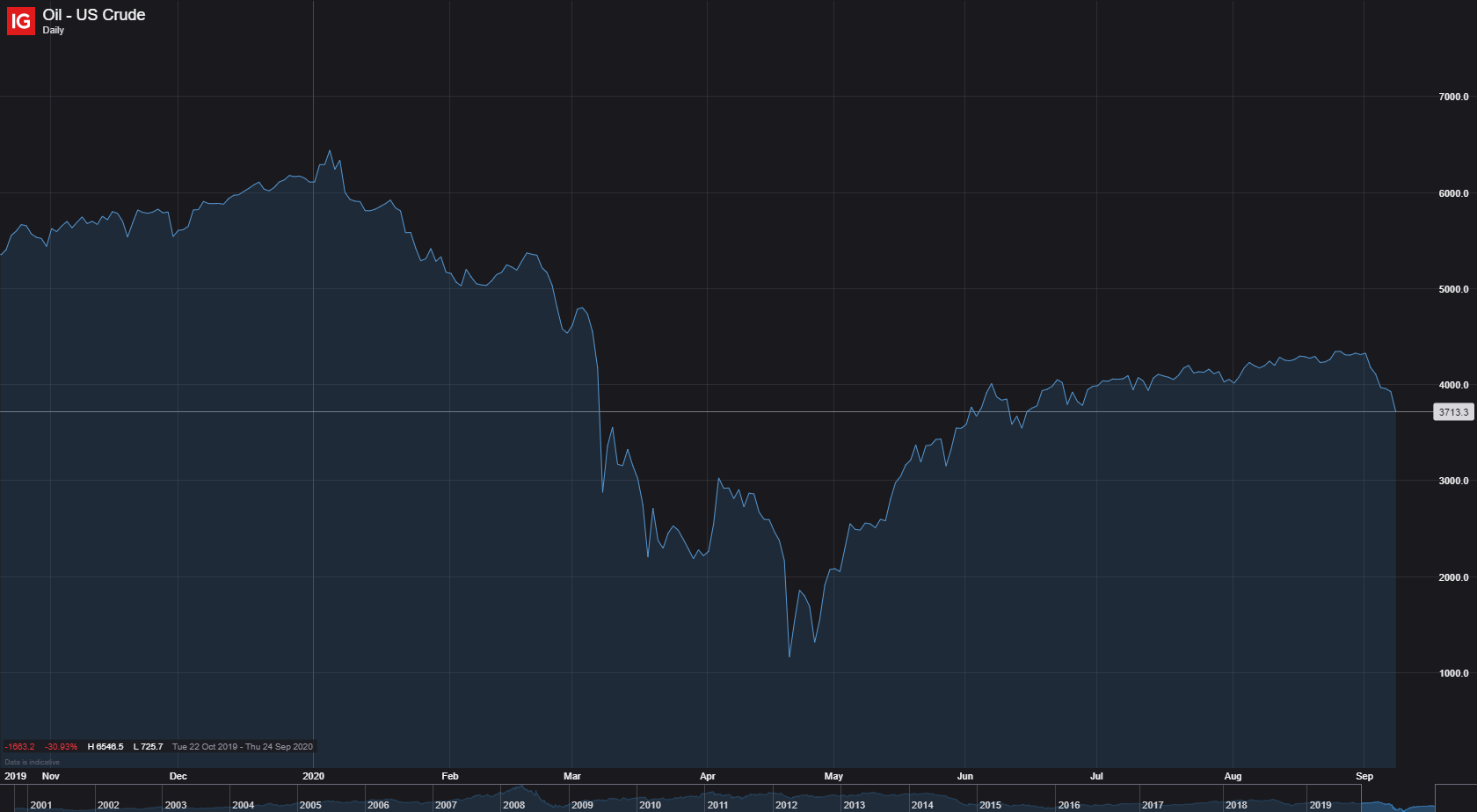 Crude oil prices fell more than 7% on Monday as the West Texas Intermediate blend slumped to its lowest level since mid-June. Trading beneath $37 a barrel, crude suffered a key breach beneath the 200-day moving average which could open the door to further losses. Apart from the technical concerns, risk-sensitive investments have experienced drastic losses in recent days and the weakness in crude oil could suggest a broader reversal in risk assets is a possibility.

While crude oil has yet to reclaim its pre-covid levels, it can be argued recent bullish sentiment in the tech sector has been a quiet tailwind for the commodity. Now as technology begins to falter, other risk assets like crude oil and lumber have begun to show similar signs of weakness.

Either way, crude oil will look to hold above possible support around the $36.61 mark which coincides with the top of the gap-lower established in the March plunge. Should it fail, secondary support may reside slightly beneath, near the $34.71 level. Together, the technical barriers might look to keep price afloat, but losses may be difficult to shrug off if weakness in other risk assets continues.