The US Dollar is clearly back on defense considering the DXY Index has been drilled lower for its third consecutive session. US Dollar downside was broad based during Thursday trade with weakness shown across practically all major currency pairs. 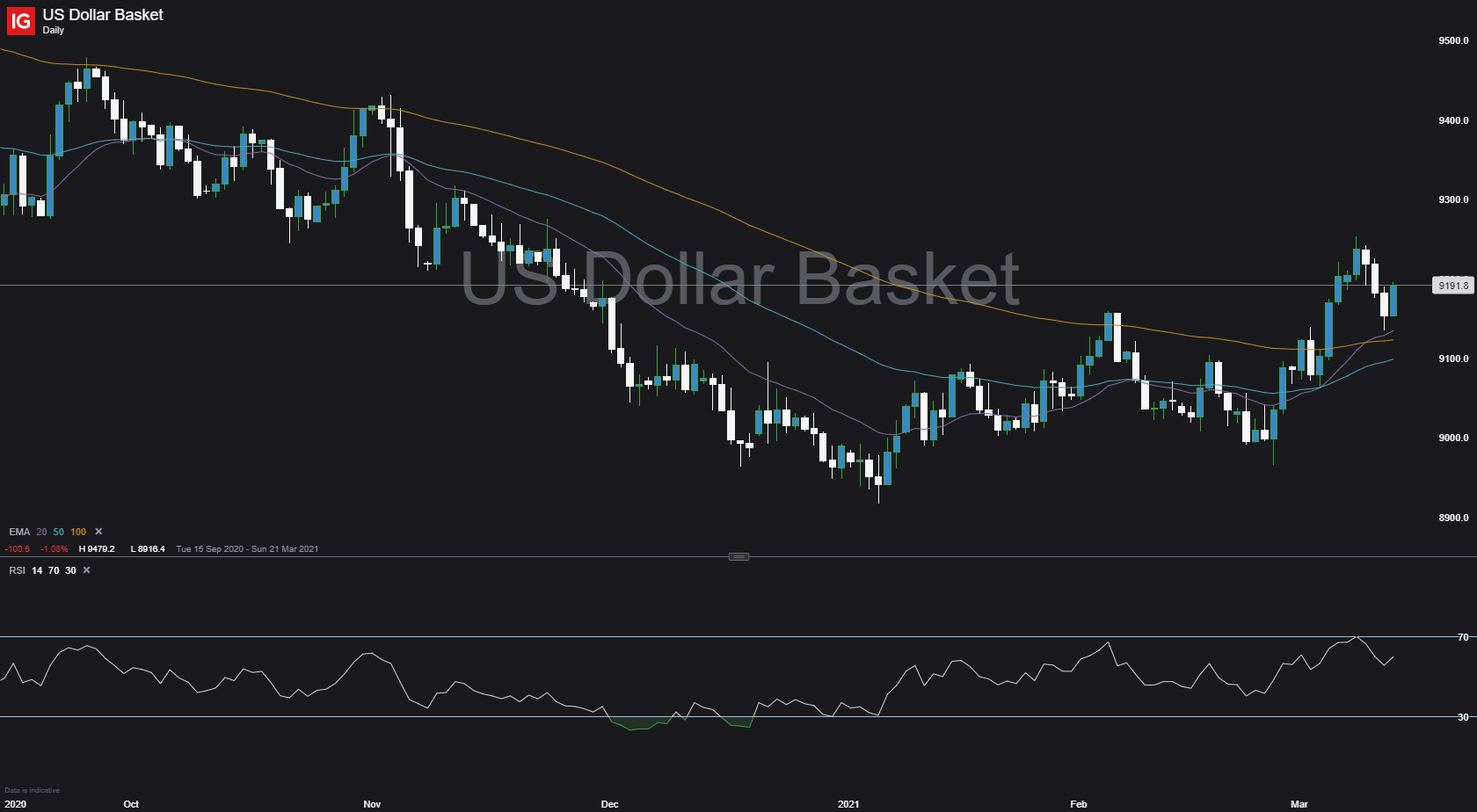 The broader DXY Index has gravitated lower correspondingly and now hovers around a confluence of technical support formed from prior resistance.  US Dollar weakness has also coincided with the relative strength index recoiling lower after probing ‘overbought’ territory.
US Dollar bears appear to be wrestling back control and might have their eyes set on the 20-day and 50-day simple moving averages. Breaching this next possible layer of defense could open up the door for a deeper reversal toward the 89.50-price level. On the contrary, if there is another flareup in risk aversion or sharp rise in Treasury yields.

The long-term technical outlook for the USD/CAD exchange rate appears overtly bearish, as price slides to multi-year lows and continues to drift towards the neckline of the Double Top reversal pattern formed in March of last year.

With a Death Cross moving average formation taking shape, and the RSI continuing to hover below 40, the path of least resistance seems lower.

However, with price struggling to hurdle key support at the April 2018 low (1.2527), a short-term correction back towards psychological resistance at 1.2800 could be on the cards.

Daily timeframe hints at the possibility of a near-term reversal higher, as price tracks within a bullish Falling Wedge pattern and remains constructively perched above 1.2600.

A daily close above the trend-defining 55-EMA (1.2728) and wedge resistance could intensify buying pressure and ignite an impulsive upside move to challenge the yearly high (1.2881).

However, if wedge resistance remains intact, an extended move lower looks relatively likely, with a daily close below 1.2600 likely carving a path for the exchange rate to retest the yearly low (1.2468).

Our information/charts are NOT buy/sell recommendations. Are strictly provided for educational purposes only. Trade at your own risk and analysis.

The DAX 30 regained some positive momentum last week and is now trading again in a tight range near the all-time highs as Friday’s push higher wasn’t enough to break above 14,140. Investors continue to be focused on the bond market as yields steepen their rise, with the US 10-year now topping at 1.601%, its highest level since February 2020.

An increase in bond purchases would likely ease investor concerns in the short-term as central banks would be taking action to control the yield curve, but given Jerome Powell’s recent remarks, we might continue to see bond purchases slow this week, pushing yields higher and putting greater pressure on stocks.

Zooming out on the daily chart we can see how the current price is finding support on a long-term ascending trendline from the March 2020 lows, pointing towards the 13,845 as the immediate support. A break below this area puts the bullish bias at risk, with long-term support expected to hold at 13,400 before a wider correction takes place.

Momentum indicators are showing a neutral stance with bullish bias with the stochastic hovering above the 50 line and the MACD trying to push into positive territory. If we continue seeing the price bounce off the ascending trendline, bullish momentum could build up in a new attempt to break the all-time highs around the 14,140 line.

The Euro has slipped significantly lower against the US Dollar since soaring to multi-year highs on January 6, on the back of the European Central Bank and Federal Reserve’s divergent stances on the provision of additional monetary policy.

Global bond markets have sold-off robustly in recent weeks, notably worrying several ECB officials and calling into question the pace of the region’s recovery. Indeed, Governing Council member, and head of open market operations, Isabel Schnabel stated that “a rise in real long-term rates at the early stages of the recovery, even if reflecting improved growth prospects, may withdraw vital policy support too early and too abruptly given the still fragile state of the economy”.
Chief Economist Philip Lane, who reiterated that the central bank will lean on the flexibility of its Pandemic Emergency Purchase Program (PEPP) to limit any unwanted tightening of financial conditions. The ECB is contemplating expanding its bond-purchasing program to underpin bond prices and in turn limit upward pressures on yields.

From a technical perspective, EUR/USD looks set to extend its recent slide lower, as price plunges below key psychological support at 1.2000 and the RSI dives to its lowest levels since June 2020.

Daily chart highlights the precariousness of the situation facing EUR/USD, as price attempts to rebound away from the sentiment-defining 200-MA (1.1816).

With the slope of the 55-EMA and 100-MA notably flattening, and the RSI eyeing a push into oversold territory, further losses appear in the offing.

Slicing through the 200-MA would likely intensify selling pressure and open the door for the exchange rate to challenge the 38.2% Fibonacci retracement (1.1695) of the uptrend extending from the March 2020 nadir to the yearly high.

However, if the 200-MA remains intact, a rebound back towards former support-turned-resistance at the February low (1.1952) could be on the cards. A daily close above that is needed to bring the March high (1.2133) into play.

The price of oil approaches the 2019 high ($66.60) following the OPEC  meeting as Saudi Arabia stays on track to reduce supply by 1 million b/d until April, and current market conditions may keep crude prices afloat as US output remains at its lowest level since 2018.

It seems as though OPEC and its allies are in no rush to switch gears as the group emphasizes “the ongoing positive contributions of the Declaration of Cooperation  in supporting a rebalancing of the global oil market,” and it remains to be seen if OPEC+ will change its tone over the coming months as group.

As a result, the price of oil may continue to exhibit a bullish behavior ahead of the next OPEC meeting starting on March 31 as OPEC and its allies pledge to “remain vigilant and flexible given the uncertain market conditions.” At the same time, fresh data prints coming out of the US may keep oil prices afloat even though crude inventories rise the most since 1982 as production remains below pre-pandemic levels.
The most recent update from the US Energy Information Administration (EIA) showed weekly field production of crude recovering from the weather-related slowdown, with output climbing to 10,000K from 9,700 in the week ending February 19 to market the rise in three weeks.

With that said, oil prices may continue to track the ascending channel established in November as crude output remains subdued, and the price of oil appears to be on track to test the 2019 high ($66.60) as it extends the series of higher highs and lows from the monthly low ($59.24).

At the same time, recent developments in the Relative Strength Index (RSI) indicate that the bullish momentum could gather pace as it pushes back above 70, and the extreme reading in the oscillator is likely to be accompanied by higher oil prices like the behavior seen earlier this year.

Crude has broken out of the range bound price action carried over from the end of January to extend the upward trend established in November, but the Relative Strength Index (RSI) failed to keep up as a break of trendline support emerged ahead of February, with a textbook sell signal taking shape ahead of March as the indicator slipped below 70.
Nevertheless, the RSI appears to be on track to threaten the downward trend established in February as it push back into overbought territory, and the extreme reading in the oscillator is likely to be accompanied by higher oil prices like the behavior seen earlier this year.