Gold prices edged higher amid what looked like a retracement across a wide range of benchmark assets following the prior day’s risk-off fireworks. This meant recovering some ground after issuing the weakest daily close in two weeks. It had fallen alongside shares as sentiment soured in the previous session, which stoked haven demand for the US Dollar and thus undermined anti-fiat alternatives. 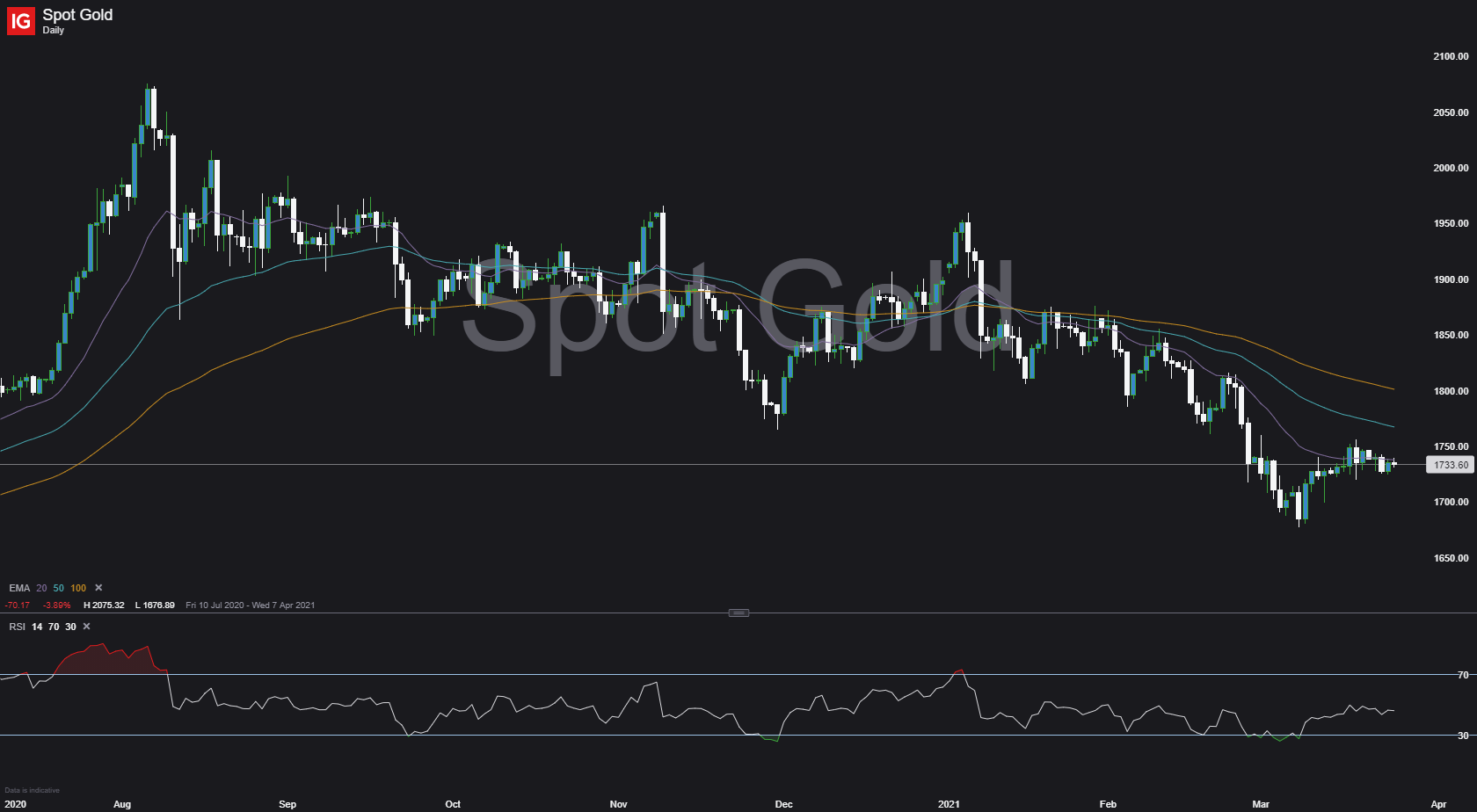 Gold prices are idling at support-turned-resistance in the 1747.74-65.30 area. The barrier is reinforced by a falling trend line set from early January. A turn lower from here faces formidable support in the 1634.83-79.81 area, with a midline inflection area near 1660. Alternatively, a daily close above resistance would neutralize near-term selling pressure and may set the stage for a retest of the $1800/oz figure.

FTSE 100 Coiling for a Breakout

Taking a closer look at the FTSE 100, the index has faltered at the psychological 6800 level, which in turn puts support in focus at 6624 (61.8% Fibonacci retracement). That said, the index appears to be coiling for a breakout as trendline support from December keeps the uptrend intact. As it stands, the two areas of interest are 6300 and 6900, should the index close above 6900 a move to 7000 can be expected in short order, while a break below 6300 would likely invalidate the bullish outlook for the index and thus open up a move towards 6000. 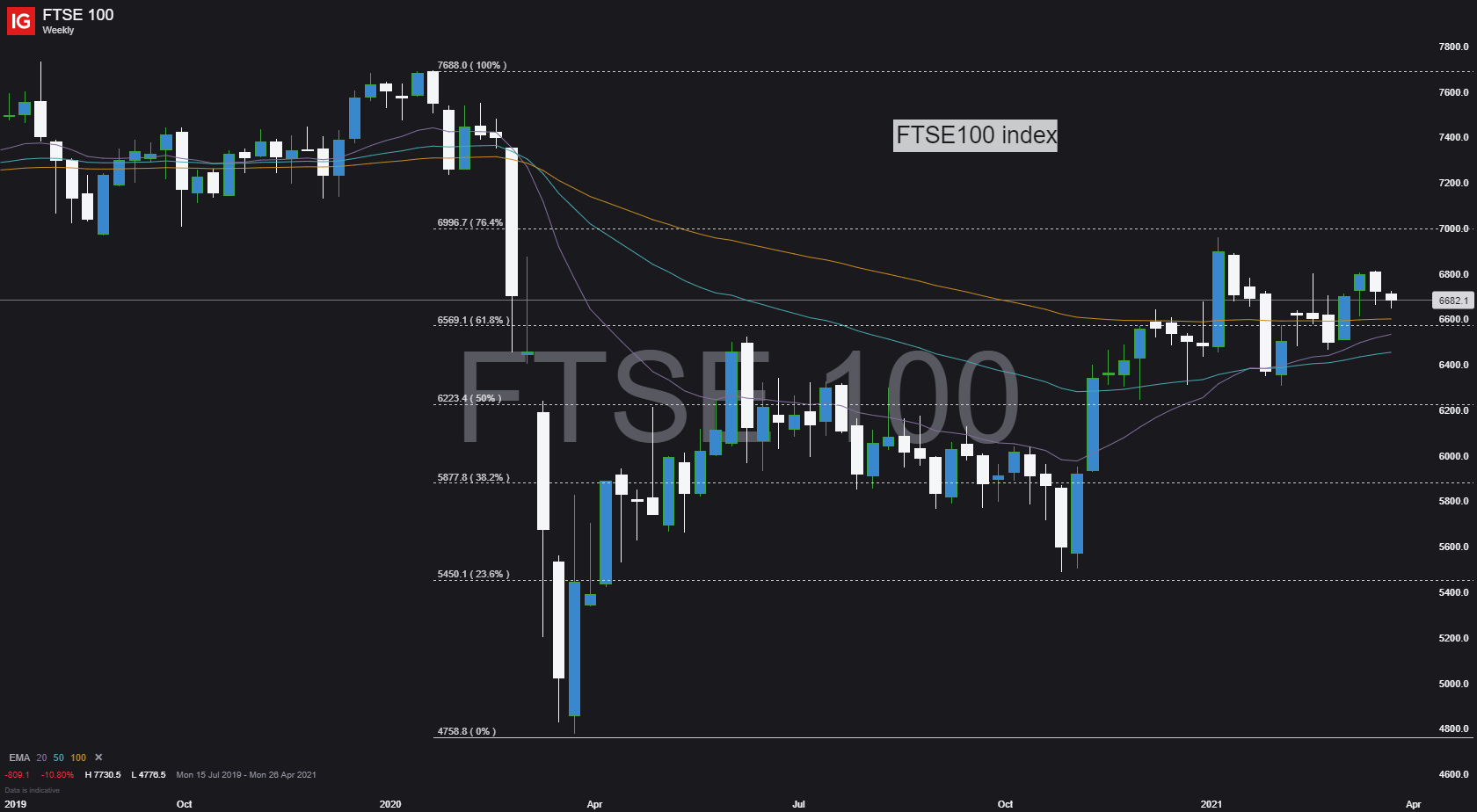 he American Petroleum Institute (API) reported a surprise draw in crude inventories of 1.05 million barrels for the week ending March 12th, compared to a baseline forecast of a 2.7-million-barrel build. This suggests that demand is picking up at a faster-than-expected pace as refineries resume operating after February’s cold blast.

Previously, data released by the Energy Information Administration (EIA) pointed to a large inventory build over the prior two weeks as extreme weather dented refinery capacity. The EIA will release the latest weekly data today, in which markets foresee a 2.7-million-barrel increase in stockpiles after a 13.80-million-barrel rise previously.
WTI has surged more than 80% from early November, backed by reflation hopes, stimulus efforts and a prompt rollout of vaccines around the globe. Restraint by OPEC+ and its allies in production hikes has further strengthened the oil price outlook alongside demand optimism. A magnificent 4-month rally, however, renders oil prices susceptible to technical pullbacks as the bullish drivers appear to have been baked-in already. 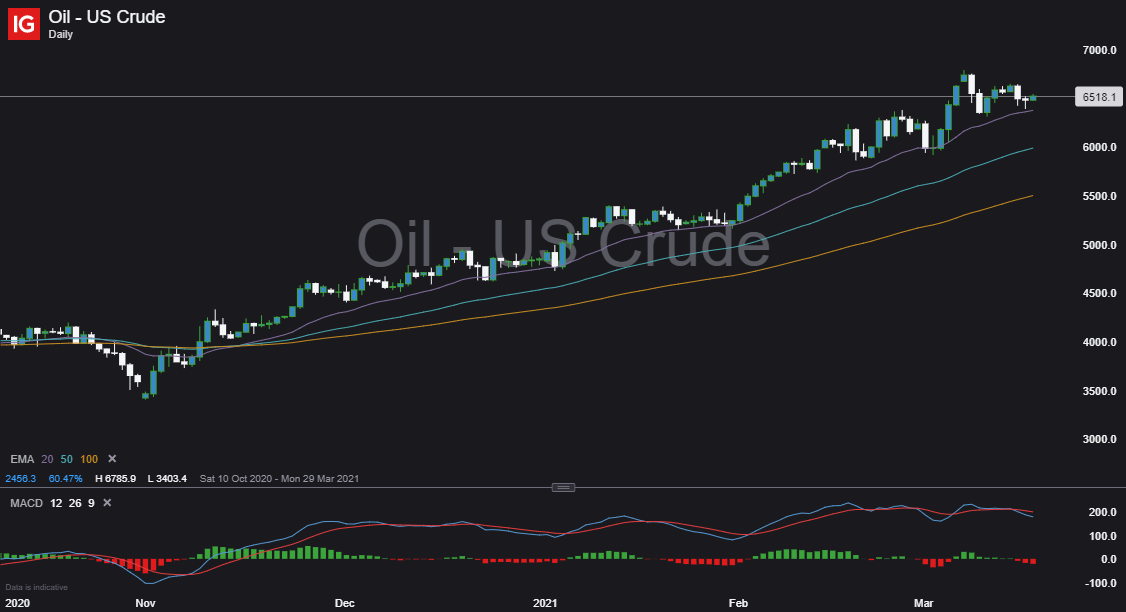 The overall trend remains bullish and is well-supported by the 20-day Simple Moving Average (SMA) line. A daily close below the 20-day SMA (63.06) would likely intensify near-term selling pressure and carve a path for price to test a key support level at 62.19 . The MACD indicator is diverging from prices movements, pointing to a weakening upward momentum.

Australia ASX 200 index is on the verge

The ASX 200 index is on the verge since mid-November. Breaking 6750 level would likely intensify near-term selling pressure and open the floor for further losses with an eye on 6,600 for support. The MACD indicator is trending lower beneath the neutral midpoint, suggesting that near-term momentum remains weak.

Our information/charts are NOT buy/sell recommendations. Are strictly provided for educational purposes only. Trade at your own risk and analysis.

The Canadian Dollar surged higher against the lower-beta US Dollar, Japanese Yen and Euro at the tail-end of last week, as market participants begin to bet on the Bank of Canada tapering its Quantitative Easing measures at its monetary policy meeting in April, in response to extremely strong jobs data.

The nation’s unemployment rate fell 1.2% to 8.2% in February, drastically exceeding consensus estimates, while the participation rate held firm at 64.7%.
BoC Deputy Governor Lawrence Schembri stating that the central bank “now expect that inflation will move temporarily above our 2% target in the coming months, to around the top of the 1 to 3% control range”, tapering QE measures could be a distinct possibility.
the longer-term technical outlook for USD/CAD rates remains skewed to the downside, significant bullish RSI divergence suggests the recent push to fresh yearly lows may be running out of steam.

CAD/JPY rates have exploded higher since breaching Ascending Triangle resistance at the beginning of February, surging just under 8% YTD to its highest levels since October 2018.

With the RSI climbing to its most extreme levels since late 2016, and the slopes off all six moving averages markedly steepening, the path of least resistance seems higher. That being said, the sheer pace of the move higher could leave the exchange rate at risk of a technical pullback.

If psychological resistance at 88.00 holds firm, a counter-trend correction back towards the March 9 high (86.38) and 86.00 could be on the cards. Clearing that carves a path for price to challenge the February high (85.10).

An extended pullback seems relatively unlikely, with the Ascending Triangle’s implied measured move suggesting that the exchange rate could extend its climb to challenge the psychologically-imposing 90 mark.

Our information/charts are NOT buy/sell recommendations. Are strictly provided for educational purposes only. Trade at your own risk and analysis.
Contact our advisors through website chat 24/7.